Well, it’s been a while since I first posted on this, but the feedback was incredible, and I got some great suggestions.  As a result, I’ve updated the Activity control and (finally) have a running sample on the web!  The fundamental idea of the control has remained the same, as well as the mechanisms by which it can work.  It’s still a prototype, but a very useful one at that!

The demo requires the Silverlight 3 beta to be installed on your machine, which can be found here: http://silverlight.net/getstarted/silverlight3/default.aspx

The demo application shows two examples of using the Activity control to display async/background activity (click the images for deep-links into the Silverlight application): 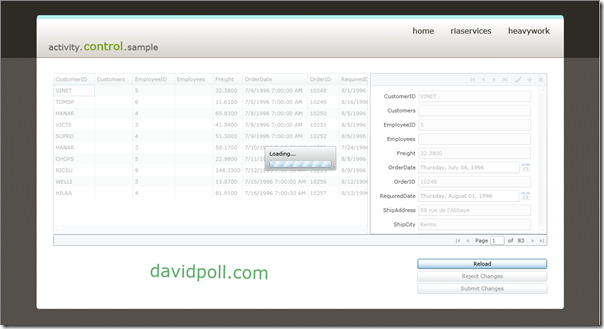 Anyhoo, let me know what you think of the changes!  I’ve gotten lots of great feedback on the control so far, and I’m sure folks will come up with more as time goes on.

For both of these, you’ll need the Silverlight 3 Beta.  The Demo application is built using .NET RIA Services.

P.S.  Big thanks again to Corrina for providing the beautiful theme I used in my application.

P.P.S.  Isn’t navigation and deep-linking in the Silverlight 3 Beta cool?  That’s how I made those images link directly to the corresponding pages of my demo application.  I may post more on this in the future.  In the meantime, take a look at the code to see just how little it took to accomplish that! (hint: MainPage.xaml in the Silverlight Navigation Application project template that’s included with the Silverlight 3 Beta Tools for Visual Studio has pretty much everything that’s required)

Update 9/14/2009 – I’ve made a small update to the Activity control to fix a performance issue.  You can find it here.